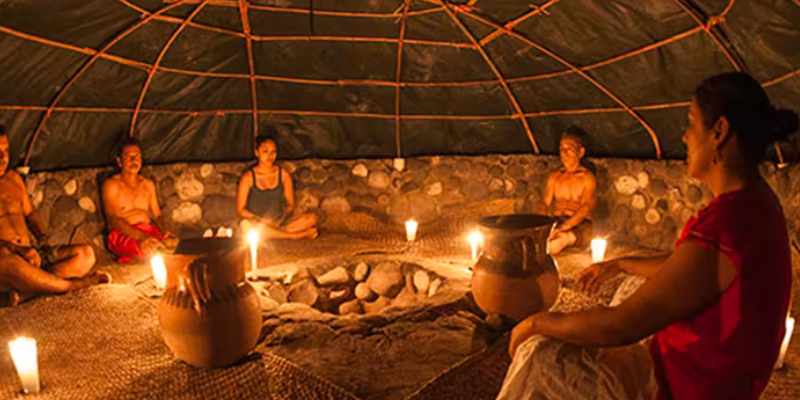 A Temazcal is a mud or brick dome-like construction and is used to house people while they undergo an ancient Aztec cleansing ritual. The intention of this is to balance ...

Mexico has understood the benefits of a temazcal ceremony for centuries. Part-sweat lodge/part-sacred ritual, participants have reported feeling physically, emotionally and mentally healthier.

What is a temazcal ceremony?

During a ceremony, participants will enter a sweat lodge (typically an igloo-shaped hut) constructed from volcanic stone, wood or cement. Once inside, hot volcanic rocks are placed in the centre, and water is poured over the rocks to produce steam. Herbs, typically sage or copal, are added to aid the cleansing process.

While every ritual is different, ceremonies can last around two hours which might include a shaman-led series of thanksgiving or chanting.

The ceremony begins outside the sweat lodge, next to where the stones are being heated.

You are then given tobacco, she tells me, throwing it onto the stones while focussing on an area of life you want to improve.

Cynthia said: “You can speak here and feel more freedom with yourself because the temazcal is a mindfulness session. It’s a great experience, and you sleep like a baby [after].”

The history of temazcal ceremonies
These ancient rituals have been part of Mexican and South American culture for around 1,000 years. The word itself originates from a Nahuatl word Temāzcalli, which translates to “house of heat.”

Thought to have derived from the Pre-Hispanic indigenous people of Mesoamerica, the cleansing ritual took place before and after battles and sports tournaments. It was also thought to have healing powers and was a place to give birth.

What are the benefits?

Temazcal, like other forms of steam room, has many physical benefits. Aston University in England, for example, notes the following five pros.

Sweat helps to push out toxins — a catch-all name for generally harmful bodies that enter our systems. Getting rid of them can help to improve your overall well-being.

The steam produced by pouring cold water over the hot rocks helps to flush out impurities in the skin, clearing the pores and creating a smoother look. Steam rooms could also help to treat acne.

Increasing the amount you sweat can help you get rid of water weight. While not a cause for concern, water weight can cause bloating and be uncomfortable.

The heat in a temazcal ceremony will open up your capillaries, allowing blood to move around the body more easily. This has many benefits including increased oxygen levels and lower blood pressure.

Decreases risks of Alzheimers and dementia

Sitting in a sweat lodge is understood to decrease the risk of dementia and Alzheimer’s disease, according to a study published in the scientific journal Age And Ageing.

Finally, many temazcal ceremonies involve deep contemplation akin to meditation. “It’s like… psychological therapy,” Cynthia told me. “It’s a very ancient ritual that we did for sanity, to be healthy, to be balanced, to stay calm in our minds.”

Join Waitlist We will inform you when the product arrives in stock. Please leave your valid email address below.